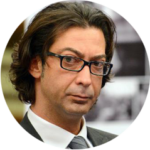 After having studied Economics he worked as a financial advisor until 2001 when he came to San Patrignano. After the recovery path he decided to remain in the community where he became an educator and after he began working in the admission office. He is currently the Coordinator of the Social Committee and at the same time he continues his activity helping people who want to start a new life in San Patrignano.