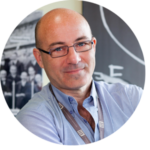 Roberto Cingolani (Milan, 1961) graduated in Physics, obtained his “Diploma di Perfezionamento” (PhD) in Physics at Scuola Normale Superiore in Pisa. Founder of the National Nanotechnology Laboratory (NNL) in Lecce, he is now the Scientific Director of the Istituto Italiano di Tecnologia. He was staff member at the Max Planck Institute in Stuttgart and Visiting Professor at Tokyo University. Author and co-author of about 750 papers on international journals, he holds about 48 patents. He has been awarded by several awards, among which the title of “Alfiere del Lavoro and “Commendatore della Repubblica”.