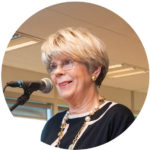 Sigríður Snævarr (Reykjavík, 1952) studied in Perugia and Firenze, at Università per gli Straneri Perugia, at London School of Economics, and at Fletcher School of Law and Diplomacy.