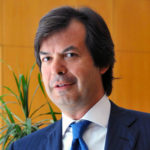 Managing Director and Chief Executive Officer of Intesa Sanpaolo since 29 September 2013.
A graduate of Economics and Business from Luiss University of Rome, he began his career at Banca Nazionale del Lavoro in 1987, where he held the position of Manager in charge of the Corporate Finance and Primary Markets Department. While developing his professional career, he carried out intense academic activities as Professor of Economics of Financial Intermediaries at the Business Administration Master of the Luiss School of Management and as Professor of Corporate Finance at the Department of Economics and Business of the University of Ancona. In 1992, he joined Bonifiche Siele Finanziaria (Parent Company of the Banca Nazionale dell’Agricoltura banking group), where he held the position of Manager in charge of the Planning and Strategic Control Department. In 1996, he took on the role of Manager in charge of Planning at Banco Ambrosiano Veneto and, in 2002, he became the Head of the Planning and Control Head Office Department at Banca Intesa. At Intesa Sanpaolo, in 2007, he became Head of the Value Creation Governance Area and then, in 2008, Chief Financial Officer and, in 2012, General Manager and Chief Financial Officer. In 2013, he took on the role of General Manager of the Bank, Head of the Chief Financial Officer Governance Area and Head of the Banca dei Territori Division. In September of the same year, he became Managing Director and CEO, while maintaining the position of General Manager. Since April 2016, within the one-tier corporate governance system, he has held the positions of Managing Director and CEO, General Manager and sole executive Board Director.
He is currently a member of the Executive Committee of the Italian Banking Association (the ABI), a Fellow of the Foreign Policy Association of New York and a Visiting Fellow at Oxford University. Since November 2014, he has been a member of the Bocconi University Board.
In 2017, Carlo Messina was awarded the “Cavaliere del Lavoro” knighthood for his services to industry by the President of the Italian Republic, Sergio Mattarella.