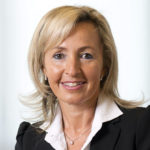 From Veneto, born 1965. Chairman and Chief Executive Officer of Alf Group, active in the production of furniture. In 2014 she was elected President of Unindustria Treviso, the first woman to hold this position among the confederations of Veneto, managing the merger with Confindustria Padova, which led to the birth of the new association Assindustria Venetocentro. From 2008 to 2014, she was Vice President of Unindustria Treviso (first delegated to finance and then to Treasury, Small Business, Merceologie and Administrative Simplifications). She was a member of the Cassa di Risparmio del Veneto from 2011 to 2014. Since 2015 she has been a member of the General Council of Confindustria. Officer of the Order of Merit of the Italian Republic.